More on John Rawls and the Enlightenment

John Rawls - Between Two Enlightenments
Posted by brad at 5:07 PM 4 comments: Links to this post

John Rawls: A Theory of Justice Part 1 - The Enlightenment Experiment

Admittedly, I am late to the table concerning John Rawls, but I am becoming quite the fan. I am currently reading "A Theory of Justice" having read, earlier this year, "The Law of Peoples". 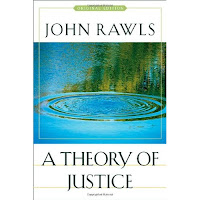 What I will be doing is journaling my thoughts as I read this monumental work of moral philosophy. My audience for much of what I write is the American evangelical but also more broadly the American electorate. Having studied a bit of Rawls this year, I am coming to the conclusion that Rawls should be mandatory reading for all Americans, probably best as college freshmen. Of course, such a suggestion is merely wishful thinking, but one can hope that the American electorate could become well informed and thoughtful in light of the irrationality that marked the 2012 election cycle.

The enlightenment is based on the idea that through reason mankind can discover the path to ever increasing peace and prosperity. The works of John Rawls and especially "A Theory of Justice" lays forth a methodology by which men and women of reason may discover a conception of justice upon which they can agree. Such a conception of justice becomes the foundation of a well ordered society and, thus, such a program becomes a step forward in the enlightenment experiment. I find such an appeal to reason glorious and dignifying. The vision of the enlightenment can be quite motivational, but likewise, to lose the vision and quest of the enlightenment can be quite disheartening. Such a cynicism rooted in a rejection of the enlightenment principles that assume solutions to fundamental problems can be solved at least partially leads to political and social apathy. The study of Rawls can be a means to overcome such apathy, but it seems that to find inspiration from Rawls, we must first address two obstacles.

First, the enlightenment experiment involves faith in reason. There then is the problem of man's political nature. In our current political and social environment, partisanism appears to be undermining the role of reason in the decisions of the various political actors. Would a reading of the likes of Rawls by the American electorate tip the scales from purely political considerations in the decisions of political actors to a more principle-based problem solving founded on a common conception of justice. Needless to say, a more principled and thoughtful politics would be welcomed. A reading of Rawls can help us embrace such a quest for public reasoning based on a common conception of justice.

While the obstacle of our political tendencies poses a threat to a more enlightened approach to our political life, our cultures post-modern tendencies likewise poses an obstacle. By post-modern, I mean the belief that all opinions are equal. Ought not an opinion which is based in fantasy as opposed to fact be discredited in the marketplace of ideas, yet it appears of late that such a naive proposition is not a given. In fact, the reality that a fantasy based opinion can survive public discourse is a threat to the enlightenment experiment that is liberal democracy. But maybe just maybe, an appeal to education, indeed an education in the writings of John Rawls and the like, might just give a shot in the arm to our ailing experiment.
Posted by brad at 8:05 PM 1 comment: Links to this post

The Need for a New Theological and Political Wineskin

Last night, I heard a theologian teach at our church. He started by saying he was very depressed because we are losing the war for evangelical Christianity in America. Needless to say, his depression had to have something to do with the election. He tried to hide his partisanship but it leaked through.

He was absolutely horrible, but I am heartened. He was an old man, and I think he represents an old way of thinking. At least I can hope.

This theologians point was that Christians need to learn how to think and persuade people to our way of thinking. He decried the anti-intellectualism in the church. He completely missed the point. The problem is not that we do not think enough. The problem is that the conservative evangelical theological system makes people anti-intellectual. The problem is that any theology which purports that the earth is 10,000 years old cannot be intellectual. What is needed is a new theological framework, a new wineskin to hold the wine of scientific FACTS. If we cannot reasonably and elegantly address the facts, then we cannot be intellectual or thinking people. The problem is that the 20th century conservative hermeneutic is not capable of addressing scientific fact. Therefore, a new hermeneutic is needed, a new wineskin.

This theologian was forlorn about the votes on homosexual marriage. If we cannot support equal rights and liberty for ALL, then we cannot have a place at the table of democracy. We need a new political philosophy that shows a compassionate and grace filled face to the Church in the political arena. It is so obvious that Christians are supposed to be the voice for the poor in America. Instead, we are seen as people who believe that what is on God's mind is the idea that homosexuals want rights under the law. In a democracy, it is fine to believe that BUT it is not the basis of a political philosophy. The American political system is founded on the motto of e pluribus unum. The American experiment is an experiment centered on belief that the a diversity of peoples can become one people. This political philosophy by definition must not bring our religion into our politics. Unless we develop a political philosophy based in a commitment to civil liberties and a passion for justice, we cannot be intellectuals in the realm of politics.

What this theologian didn't realize is that what created the anti-intellectualism is the inability of his generations theology to incorporate scientific facts and to understand the relationship between religion and politics under our constitutional democracy. What is needed is better ideas not doubling down on the failed ideas of 20th century evangelicalism.
Posted by brad at 3:26 PM 12 comments: Links to this post