My Christian Friend - A Positive Testimony

originally posted here: Deep Thoughts
Let me begin by saying that Joe is a good friend of mine. I admire his capacity to have a  solidly evangelical friend like myself. He is truly a great friend, but this post is about another friend of mine, Dan. I was going to write a post that covered three of my best friends but I realize that in the world of blogging most folk do not have the time to read a lengthy post, so I decided to limit this to one friend instead of three.
I met Dan in 1999. He is the pastor of a local church in Bellflower, CA. Nineteen years ago he came to Bellflower from Michigan for a job interview at our church. He said to the council, “if you want someone to cater to the current culture of the church. You are looking at the wrong man. My vision is to build a multi-ethnic church that displays in a tangible way God’s love for all people and be a symbol in this city of community in the midst of diversity.” Nineteen years later, Dan has made good on his promise.
If you know anything about organizations, resisting the status quo and attempting to implement change on principle without regard to politics is a difficult and courageous act. Men and women who take this path are heroes. These people are those who suffer real loses and endure real hardship and real heartache for the sake of their principles. In light of recent American history, building bridges between cultures and amongst diverse people is the great task of our generation. Men and women like Dan developed vision for this work to build beautiful community in their youth in the 1970’s, and some, like Dan, had the wisdom, patience, and conviction to bring their vision to fruition.
I would not betray Dan’s friendship, but I know he has shed countless tears as his passions and convictions have been misunderstood through the years. Being an agent of change is lonely work, but it is worth the difficult times in light of the internal witness that you are on the right side of history. Just last year,I remember at an all nations service representatives from over 20 nations from the congregation stood up on stage and spoke a word of blessing over the congregation in their native tongue.
Personally, my friend Dan has been a source of comfort for me in some of my deepest trials. He has believed in me when it seems like only my wife and my very closest friends stood by me. Even greater, my friend has let me encourage him and stand by him in his times of need. Though in many ways, Dan is my superior, he has humbled himself and been a peer to me and shared the journey, as a friend.
I am not saying that only Christians can be friends like Dan is to me or that only Christians labor to make the world a better place, but throughout the world many, many Christians labor to build beautiful communities and those of us who participate in these communities find ourselves deeply indebted to the witness to ‘all that is good’ that these communities communicate to ourselves and our families. All of us, likewise, owe a debt of gratitude to the men and women that labor to build the institutional church in order that this witness will abide for future generations.
peace, brad
Posted by brad at 12:46 PM 2 comments: Links to this post

Capitalism and The Export of American Culture 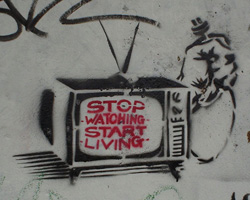 Being a card caring member of the evangelical church, I often hear the rant that America "has changed so much in the last so many years". The sense is that our cultural values have changed from innocence and honesty to selfishness and sexual promiscuity. It would be a good study to determine to what extent this perception is true, but, for now, let's assume that things have changed culturally. Why is this so?

The reason for this I believe is obvious. Capitalism caters to our appetites. Couple this basic fact with the rise of media in the home and in all our culture, and you end up with a culture that is immersed in images that cater to immediate gratification and our lowest selves. So, if you judge the culture by media and teenager fascination with all that is celebrated in the media, you will inevitably believe that the culture has radically changed.
Pop media is a tool of what sells, and what sells will always point to the least common denominator. I think it is best to realize that this "for the masses" approach is the way markets work. For a company to be BIG, it has to sell to all of us and appeal to what we all have in common. We all have in common our appetites and our weaknesses with respect to our appetites. Therefore, privately owned, profit driven media will necessarily and always target shallow and emotion driven content. Media has to be big to effect us all. Therefore, what effects us all will always be shallow and sexualized. That is just the way a profit driven media works.
Think about it. When I was a kid, we used the term "sell out". To sell out meant to go pop. To go pop means to change your content to sex. Competition has driven a rush to the bottom. Think about talk radio. The more black and white the discussion the higher the ratings. To succeed, a person has to be dumb enough to preach passion without nuance. Nuance and analysis doesn't sell.
So the moral to the story is that pop culture is simply a reflection of our appetites. What has changed is the volume of media not us. This process has been evolving for a long, long time. We haven't changed but the capitalist market has become a greater part of the cultural noise.
The solutions are simple. We need to fast from pop culture and media in the home. We all need to take back the home from the market place. We need to teach our children that what you see on TV and in pop culture by definition represents only what is the least common denominator of our nature. If we desire to have dignity and to stand above the crowd by being honorable men and women, we must become distinct from pop culture. We need to simply realize that all that media is the market not our identity. We are people not merely consumers.
enough for now,
peace, brad
Posted by brad at 9:17 AM 4 comments: Links to this post